Natalie Whipple
"An action-packed and hilarious sequel that will have you gasping, laughing, and wondering about the choices which make us grown-ups - 'normal' or not."

An action-packed and hilarious sequel that will have you gasping, laughing, and wondering about the choices which make us grown-ups – 'normal' or not.

Three months after Fiona has escaped from her father's crime syndicate, all seems well in her tiny town of Madison, Arizona. She and Seth are happy together – apart from the teensy fact that Fiona is jealous that Seth can see through her invisibility – and her family and friends are safe.

But when the local syndicate and even the army show up, it's clear there's more going on in the town than she could have ever imagined. It seems like these huge powers are interested in the old Radiasure factory – could they be reproducing the infamous drug that caused mutations? – and everyone suspects Fiona of knowing more than she should.

As Fiona and her friends try to cover their tracks, they discover that they do have some dangerous knowledge. Though at first determined to stop anyone from remaking Radiasure, Fiona learns a secret that could change everything, including her invisibility. Torn between her own desires and the greater good, Fiona might be too blindsided to see the real villain coming. 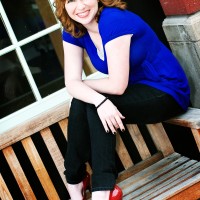 Natalie Whipple is the author of TRANSPARENT, BLINDSIDED (sequel to Transparent), HOUSE OF IVY & SORROW, and RELAX, I'M A NINJA. In addition to that, she is on the writing team for the cRPG 'TORMENT: TIDES OF NUMENERA' that will be out sometime in 2015.

She grew up in the Bay Area and relocated to Utah for high school, which was quite the culture shock for her anime-loving teen self. But the Rocky Mountains eventually won her over, and she stuck around to earn her degree in English linguistics at BYU, with a minor in editing. Natalie still lives in Utah with her husband and three kids, and keeps the local Asian market in business with all her attempts to cook Thai curry, pho, and bulgogi. Follow Natalie at betweenfactandfiction.blogspot.co.uk or on Twitter @nataliewhipple