Vikki Wakefield
"They call me Friday. It has been foretold that on a Saturday I will drown ..."

They call me Friday. It has been foretold that on a Saturday I will drown …

Friday Brown was saved by Silence. Brought up travelling the endless roads of the Australian wilds, Friday's past was shaped by stories, told dreamily by her mother around glowing campfires and on the edge of endless plains. But her mother's death left Friday lost, and running from a family curse that may or may not be real. Desperate and alone in the middle of a strange city, a voiceless boy with white-blond hair and silver eyes appeared from nowhere, stole her heart and took her home.

Friday is welcomed by a strange gang of lost kids and runaways. Led by the beautiful but fearsome Arden, the group live an underground life in the city, begging, stealing and performing to keep themselves alive. But when Silence returns to the house covered in someone else's blood and terrified, the gang escape to an outback ghost town, leaving everything behind. Murungal Creek is abandoned, desolate and full of empty promises. Life in Arden's gang starts to unravel, and the anger, lies and deceit that have been hidden for so long start to float to the surface. Having been swept along by the currents of life for as long as she can remember, Friday suddenly finds herself struggling to stay afloat, and alive. As devastation threatens, Friday must face up to her past, and fight, for the first time in her life.
From the winner of the Adelaide Festival Award for Literature, 2012, FRIDAY BROWN is a remarkable story, described by the Weekend Australian as a story with 'characters so palpable you can imagine passing them in the street.' 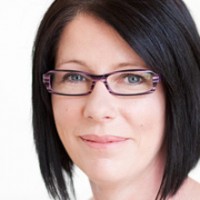 Vikki Wakefield is an award-winning Australian author of contemporary YA fiction. After high school, Vikki worked in banking, journalism, communications and graphic design and, after an extended writing drought of fifteen years, she enrolled in a professional writing course. During her study she rediscovered young adult books and found her voice.

Vikki's writing has been described as 'original, real, startling and beautiful' and she also writes short stories, articles and film scripts. In her spare time she tries to paint, draw and play basketball. She was born in Adelaide and still lives and writes there. FRIDAY BROWN is Vikki's debut UK novel. Follow Vikki at: http://vikkiwakefield.com/ or on Twitter: @VikkiWakefield