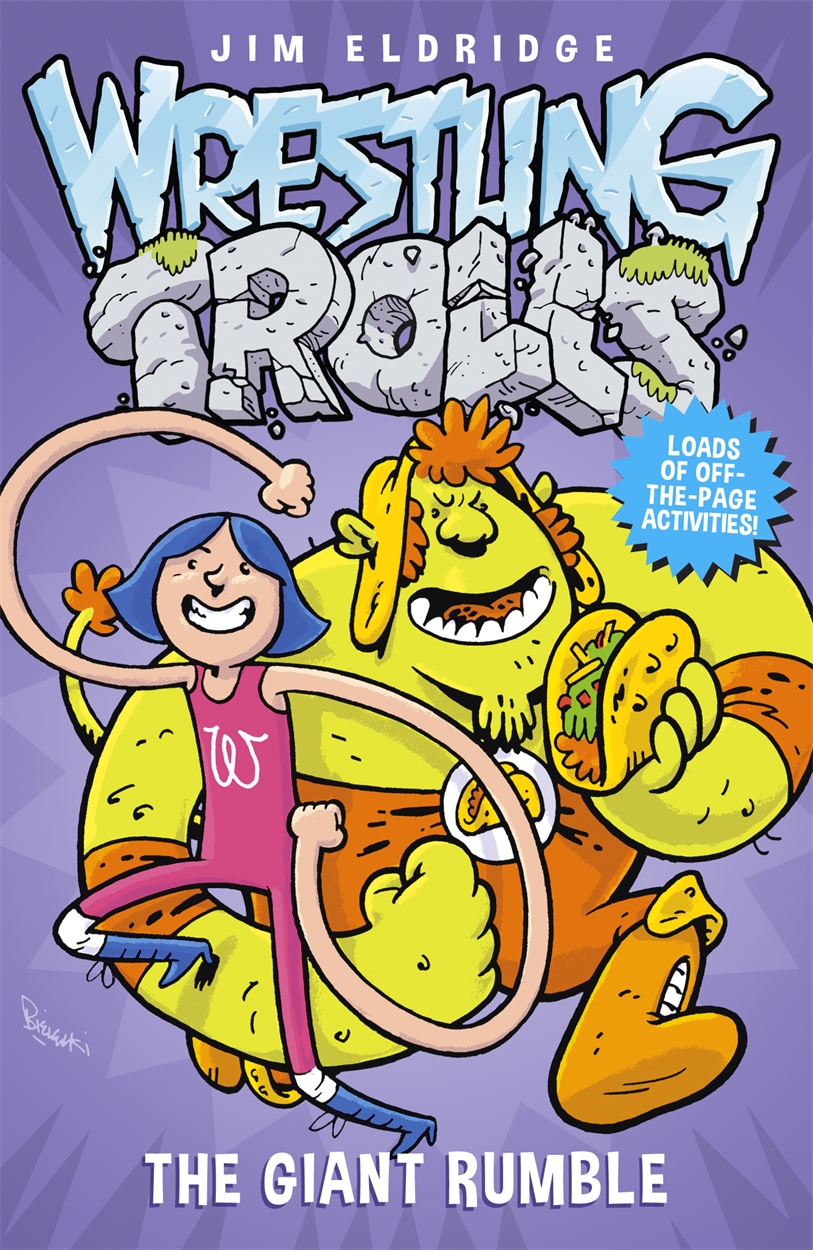 The third slam-down book in the hilarious WRESTLING TROLLS series

Waldo’s Wrestling Trolls are back, and they’re ready to rumble! But the villainous Lord Veto has other plans. Challenged to a Giant Rumble but suffering from a shortfall of wrestlers, Jack and his friends set out to find more participants for their great battle.

But what starts as a fun-filled road trip in their trusty caravan soon becomes an action-packed adventure filled with dangers such as farting Billy Goats, poisonous spiders and evil servants of the wicked King Nugget. With their new taco-eating, super-bendy and even transfigurative friends at hand, will the Wrestling Trolls make it back alive – or better yet, to the match?

This WRESTLING TROLLS story was created on The Story Adventure, where week by week Jim wrote a new chapter using ideas from school children – characters, locations and plot twists. See if you can spot them!

'You took a challenge to put ten Wrestling Trolls into a ring against ten of his orcs,' said Robin. 'How many Wrestling Trolls have you got?' 'Er . . .' began Milo. 'Me,' said Big Rock proudly. 'That's one,' said Robin. 'Where are you going to get the other nine?' Meenu pointed at Jack. 'He turns into one,' she said. 'That's two.' 'But not all the time,' sighed Jack sadly. 'I can't control when it happens. It may not.' 'Let's be positive,' said Princess Ava. 'I'll annoy you in some way to make you change. So that's two.' 'There's Grit!' said Milo. 'She's a great wrestler! And she's a troll!' 'Yes, but she went off on her travels and no one knows where she is,' said Robin. 'We'll find her,' said Milo confidently. 'We'll send out carrier pigeons with messages.' Robin gave a doubtful snort. 'It's all a bit iffy, if you ask me,' he said. 'We have to make it work,' said Big Rock firmly. 'Big Rock's right,' nodded Jack. 'Okay, finding seven more Wrestling Trolls is going to be hard -' 'More like impossible,' snorted Robin. 'But,' continued Jack firmly, ignoring the old horse's interruption, 'that's what we'll do.' 'Jack right,' nodded Big Rock. 'We do this together.' 'I can be an Honorary Troll!' blurted out Princess Ava. 'An Honorary Troll?' repeated Big Rock, puzzled. 'Yes, it means I can be . . . a Wrestling Troll for the occasion,' said Princess Ava. 'Big Rock, Grit, the Masked Avenger and me - if I can turn into Thud,' said Jack, counting on his fingers. 'That's four.' 'Hmm. It could work,' said Robin. 'But we still need another six.' 'Then we'll find six more Wrestling Trolls and put together a team,' declared Milo. 'And where,' enquired Robin, 'are we going to find them?' 'We'll use my Uncle Waldo's map,' said Milo. 'The one he marked up with all the places he took Waldo's Wrestling Trolls to. We're bound to find some good wrestlers there.' He gave a confident grin. 'Let's go get the map! We're going on a journey!' As Milo, Big Rock and Jack headed for the dressing room, Meenu looked at Ava excitedly. 'This is great!' she whispered. 'It'll be just like my family's holiday road trips - all working together.' 'Yes, it will.' Ava smiled. The two girls headed after the others, with Robin following. 'A family,' said Robin quietly to himself. 'I like that.'
We use cookies to ensure that we give you the best experience on our website. Click 'OK' to accept or read more about the cookies we use & our privacy policy.OkRead more