When I still counted my age in quarter-years, I was gifted The Kingfisher Book of Mythology. The cover depicted the world tree Yggdrasil, with the serpent Nidhogg gnawing on its roots. A squirrel and an eagle converse at the top of the tree’s branches. There’s a rainbow, a city in the sky, and a snake chewing on its own tail. So far, so very Norse.

The book was chock full of beautiful illustrations: of heroes wrestling monsters and exploring unmapped lands; of gods warring with mankind. Each chapter dealt with the mythology of a different part of the world. There were those I’d learnt about at school – the Latin and Greek gods with their enormous egos, and the hubris of the men and woman who consorted with them – and those I knew almost through osmosis like the Norse legends. But then there were others that were totally new to me – the trickster spiders of African mythology and the eight-headed dragon that was finally defeated by the Shinto god Susanowo.

I still have that book, and its tattered pages and faded illustrations have become one of my comfort reads. Even today it inspires the same awe that it did all those years ago. So many of those stories, even if I only read about them for the first time then, were already familiar. At the risk of ringing a great big cliché klaxon, the stories spanned cultures in a way that showed me exactly how much we have in common with each other. I loved discovering that it wasn’t just Medusa who had snakes for hair: the Mohawk shaman Atotaroh did too, before he became the leader of the Iroquois nations. Nearly every continent has a flood myth, too.

That fascination with mythology lasted through my childhood and into university, where I was introduced to the poetry of a chap called Edmund Spencer. Specifically, an epic poem called The Faerie Queene. Everything about this story entranced me – the sun-drenched land of Faerie; the Game of Thrones-style range of characters; the way the stanzas called out to be read aloud (I got some interesting side-glances from my fellow passengers on the long bus journeys between my university and my hometown!)

For those unfamiliar with The Faerie Queene: it spans six ‘books’, each of which follows a knight or knights who embody a particular virtue, such as temperance, friendship or courtesy. But two characters tie the whole poem together: Arthur, of King Arthur fame, and the mysterious Gloriana, the ruler of Faerieland, where the poem is set.

Gloriana – along with many of the ‘virtuous’ women in The Faerie Queene – is a very thinly disguised tribute to Elizabeth I, who had been monarch for thirty years by the time Spencer published the first three books. There’s a lot of speculation over whether Spencer intended to criticise or praise his queen, but since she awarded him a yearly allowance as a result of it, I tend to fall into the latter camp. She wasn’t stupid, she’d have known if she was being mocked.

However, I do think that Spencer was trying to work through a lot of the confusion that people were feeling at the time. The sixteenth century wasn’t exactly renowned for its notions of gender equality, and Elizabeth was a troubling figure for many reasons. Quite apart from the fact she was a woman (shock! horror!), her legitimacy was constantly called into question because of her mother, Anne Boleyn. She also famously refused to marry and produce an heir. In the 1590s, when The Faerie Queene was published, Elizabeth was ageing, and a lot of people were worried about what would happen to the country when she passed away. (Is any of this anxiety over the future feeling relatable right now?!)

I love this poem, but Spencer’s attempts to justify why having a female ruler is not too bad really, guys, is a bit problematic in this day and age. I really wanted to see if I could write a modern alternative. There is no Gloriana in my novel; there is Fern instead, who is a little less almighty ruler and a little more misanthropic. And although Fern’s twin brother Ollie was not consciously added because of The Faerie Queene, it does make me smile that he and Fern nod to the themes of duality in Spencer’s poem.

Spencer created some incredible heroines: there’s faithful Una; kick-ass knight Britomart and huntress Belphoebe. All of them have a place in Midnight’s Twins, although not strictly in correlation to their Renaissance counterparts…

Faerieland has become Annwn – which in Welsh mythology is the name for the Otherworld. There are fewer opportunities for my knights to ride their horses across wide open plains. Instead, I wanted to place them in one of the most modern and diverse cities in the world, and one with a really rich history of its own: London. I hope that in mining the rich seams of Celtic mythology I’ve managed to create a world that has an element of nostalgia, but that in setting it in contemporary London it has brought the heart of Spencer’s beautiful, epic poem into the modern day.

As for Arthur? Well, he’s there in Midnight’s Twins too, but not in any way that Spencer would have approved of.

Midnight’s Twins by Holly Race is available to buy online and in all good bookstores now! It is also available in Ebook and Audiobook format. Get yours today: 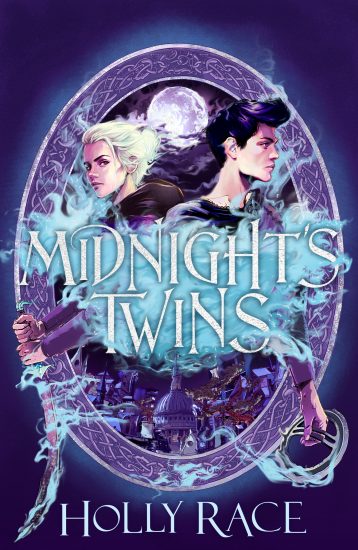 Fern King is about to uncover a place that she could not have imagined in all her wildest dreams. Annwn is the dream mirror of our world, a place where Dreamers walk in their slumber, their dreams playing out all around them.

But the world Fern discovers is a fragile one, threatened by vicious nightmares. Nightmares that are harder and harder for the Knights to defeat. Something dark is jeopardising the peace and stability of Annwn, something that must be rooted out at all costs. And gradually, Fern realises that the danger lurking inside our sleep is more insidious and terrifying than any nightmare. Because if you can influence someone’s dreams, you can control their thoughts …

Holly Race works as a development executive in the film and TV industry, most recently with Aardman Animations. Holly is a Faber Academy graduate, and Midnight’s Twins is her debut novel and the first in a trilogy. Holly lives in Cambridge with her family.

Prev: Our Favourite Indie Bookshops »
Next: Why We Love Independent Bookshops »

Quiz: Can you avoid getting Poisoned?

Quiz: Find your next Autumn read…

Quiz: Which Misunderstood Villain are you?