The Queen of Nothing Excerpt

The final book in The Folk of the Air trilogy doesn’t publish until next year, but to tide you over here’s a sneak peek of what to expect…

The screen door bangs. Then Taryn rushes in front of me, her gown blowing in the morning breeze. If I didn’t know what a real princess of Faerie looked like, I might think she resembled one. For a moment, it seems impossible that we’re related, no less identical.

“What happened to you?” she asks. “You look like you got into a fight.”

I don’t speak. I just keep walking. I am not even sure where I am going, as slow and stiff and sore as I am. Maybe to Bryern. He’ll find me a place to crash, even if I won’t like the price later. Even bunking with Grima Mog would be better than this.

“I need your help,” Taryn says.

“No,” I say. “No. Absolutely not. Never. If that’s why you came here, now you’ve got your answer and you can leave.”

“Jude, just hear me out.” She walks in front of me, causing me to have to look at her. I glance up and then start to circle around the billowing skirts of her dress.

“Also no.” I say. “No, I won’t help you. No, I won’t hear you explain why I should. It really is a magical word: no. You say whatever bullshit you want and I just say no.”

“Locke is dead,” she blurts out. 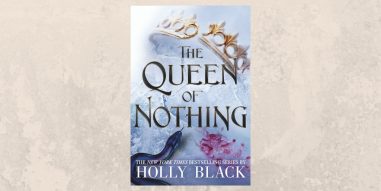 I wheel around. Above us, the sky is bright and blue and clear. Birds call to one another from nearby trees. In the distance, there’s the sound of construction and road traffic. In this moment, the juxtaposition of standing in the mortal world and hearing about the demise of an immortal being — one that I knew, one I kissed — is especially surreal.

“Dead?” It seems impossible, after everything I’ve seen. “Are you sure?”

The night before his wedding, Locke and his friends tried to ride me down like a pack of dogs after a fox. I promised to pay him back for that. If he’s dead, I never will.

Nor will he ever plan another party for the purpose of humiliating Cardan. He won’t laugh with Nicasia nor play Taryn and I against one another again. Maybe I should be relieved, for all the trouble he caused. But I am surprised by feeling grief instead.

Taryn takes a breath, as if steeling herself.  “He’s dead because I killed him.”

The Queen of Nothing publishes 7th January 2020.

At the moment you can pre-order your copy from