Shiver The Whole Night Through

Darragh McManus
"A small town in Ireland, a chilling mystery, a teenage detective - and a message from the dead"

A small town in Ireland, a chilling mystery, a teenage detective – and a message from the dead
After months of misery and feeling ready to end it all, Aidan Flood wakes up one morning to find that local beauty and town sweetheart Sláine McAuley has done just that. Aidan suddenly discovers a new sense of purpose and becomes determined to find out what happened to her. The town is happy to put it down to suicide, but then one night Aidan gets a message, scratched in ice on his bedroom window: 'I didn't kill myself.' Who is contacting him? And if Sláine didn't end her own life … who did? 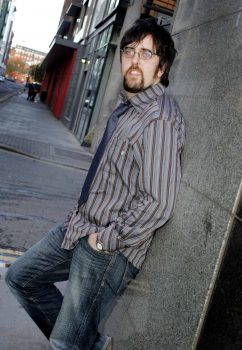 Darragh McManus is an author, journalist, playwright and screenwriter. SHIVER THE WHOLE NIGHT THROUGH is his first Young Adult book. He has previously published two crime novels: a vigilante thriller called EVEN FLOW (2012) and noir-style mystery THE POLKA DOT GIRL (2013). His first book was the humorous non-fiction GAA CONFIDENTIAL (2007), and he released a comic novel, COLD! STEEL! JUSTICE!!!, as an e-book under the name Alexander O&#39;Hara (2011). For more than a decade Darragh has written reviews, features and opinion columns for several papers, including The Irish Independent, Sunday Times and Guardian. Several short stories have appeared in literary journals, in Ireland, UK and US. He&#39;s also written a play, which has had cast readings in Manhattan and Belfast and will be recorded for radio broadcast this year. Darragh lives in the west of Ireland and is currently working on some new YA stories. Follow Darragh at darraghmcmanus.com or on Twitter: @McManusDarragh