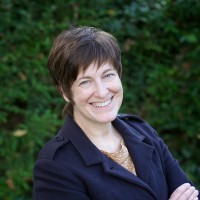 Ellen Renner was born in the USA, but came to England in her twenties, married here, and now lives in an old house in Devon with her husband and son. Ellen originally trained as a painter and surrounds herself with sketches of her characters as she writes. She spins wool as well as stories, knitting and weaving when time allows. She plays the violin, fences (badly!) and collects teapots and motorcycles.

Her first book, CASTLE OF SHADOWS, won the Cornerstones Wow Factor Competition, the 2010 North East Book Award and was chosen for both THE INDEPENDENT and THE TIMES summer reading lists and, along with the sequel CITY OF THIEVES, was included on THE TIMES list of best children's books of 2010. TRIBUTE was Ellen's first YA book, and you can follow her at www.ellenrenner.com or on Twitter: @Ellen_Renner