Supposedly, there are only seven types of story in the world, which means that most of us writers – most of the time – must be adapting a pre-existing story. Retellings (of Jane Austen, Greek myths and fairy tales, to give just a few examples) are deservedly popular. But of course, literature isn’t the only place to look for inspiration. Art, nature, music, architecture (try visiting the Tower of London without thinking about the ultimate wicked uncle, Shakespeare’s Richard III) – stories are everywhere.

The initial inspiration for A Throne of Swans was actually dance. As a family we love ballet – some of us take part, some of us just watch – and Swan Lake is one of our favourites. It has lots of interesting elements. There’s a main character who’s cursed into shapeshifting; a handsome prince; an evil wizard and his equally evil daughter. When we first considered adapting Swan Lake into a YA novel, way back in 2017, our initial inclination was to stick broadly to the plot of the ballet: a princess, cursed to spend each day as a swan, falls in love with a prince (who first attempts to hunt her when she’s in swan form) and is then accidentally betrayed by him. But as we kicked the story around between us, we realised we weren’t that interested in the main character, Odette. The one who really intrigued us was Odile, who we’ve renamed as Aderyn in A Throne Of Swans. In the ballet, Odile is the daughter of the evil wizard, who entraps Siegfried by appearing at a ball looking exactly like Odette (apart from being dressed in black). We started wondering what her back story might be. Were she and her father really evil, or had they been driven to the dark side by someone (or something) else? Where was her mother? And was swan-hunting Siegfried – so easily deceived – really the good guy he was made out to be?

At this point we did two things. One was to get out the whiteboard sheets and start brainstorming characters and plot. The other was to look back at other, older tales involving swans and shapeshifting. There are several swan maiden and swan knight stories (for example, the German legend of Swanhilde) where the ability to transform into a swan is a gift, not a curse. This gave us the idea of a society built upon the ability of its rulers to shapeshift into swans and other birds, and lead to Aderyn’s initial dilemma: if everyone else can turn into a swan and you can’t, what’s that going to mean for your status and (more importantly) your life expectancy? We also looked at The Children of Lir, an Irish legend, and The Six Swans, one of the Grimms’ Fairy Tales. Both of these stories have an evil stepmother (very much a typical fairy tale character!) who curses her husband’s children into their swan shapes. The Six Swans also has a sister who saves her brothers, not a million miles away from our Aderyn, who has to figure out a way to save her own adopted family from various unpleasant fates…

Swan Lake and its associated stories were our initial inspiration for A Throne of Swans. But we also drew on other, unrelated sources. Hamlet, seeking revenge on the uncle who murdered his father, and Electra, driven by fate to avenge the death of her father, are both definitely in there. So is history. In real life it was Edward III’s many, many children, all with some claim to rule, that ended up plunging the country into the Wars of the Roses. Our version of Edward III is Cygnus I; his descendants rule Solanum’s dominions, but they all have an eye on the throne. There’s even a little bit of The Lord of the Rings: just like the Stewards of Gondor, Cygnus was originally the Steward to the previous ruling family.

To unpick all the influences on A Throne of Swans, we’d probably have to go back through every poem, novel and history book we’ve ever read; there’s a reason why the first advice given to someone who wants to write, is to read. But for us, the key starting point to writing an adaptation is to find something you love (whether that’s a story, a piece of music or a painting) and let your mind wander. There may only be seven types of story, but there are an infinite number of variations on each theme. Give it time, and you’ll find something that’s uniquely yours. 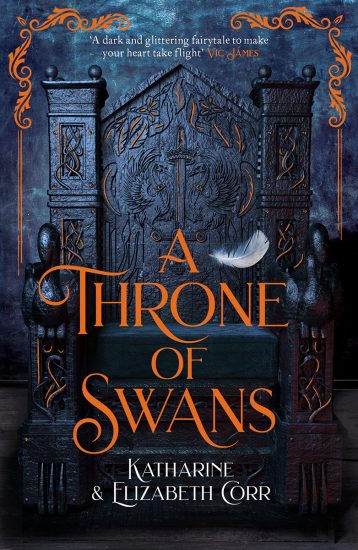